Coming back from the dead

If anyone is still following this, I've started a new blog over on altsetcetera.com. Hope to see you there!

So long and thanks for all the fish

For the first time in six years, I cancelled my WoW subscription. I thought I'd never see the day I'd have enough of WoW, but it seems the day has come. I'm not deleting characters, I'm not giving away gold and stuff. But I don't see myself wanting to play this game I know too well, and which has changed just a little too much for my taste over the years. Maybe it's time for something new.

To all of you who read this blog and commented (or not) I want to thank you. It's been a lot of fun. I wish you all the best.

And who knows, maybe I'll come back to this game I used to love so much, because after all, I can't make up my mind about anything, ever.
Posted by Lyrestra at 08:59 5 comments:

It's been almost a month now since I've last posted and I'm sorry about that, but the truth is I get dizzy and feel sick whenever I open the game. Because turns out morning sickness really should be called fuck-you-you're-gonna-feel-like-puking-24/7 sickness.

On new year's eve I found out I'm pregnant and though I thought I should take advantage of those last couple months to play as much as possible, I just can't. I don't even feel like playing at all. I log on every day to do my daily with Nomi and then I log off for the day. That is the extent of my game time for the past month. And I'm almost exalted with Nomi now, so I probably won't even have an excuse to log on after the weekend. I don't expect there will be much action around here for at least another couple weeks. If the nausea ever goes away.

Until then, I wish you all much fun in Pandaland!
Posted by Lyrestra at 16:14 7 comments:

Email ThisBlogThis!Share to TwitterShare to FacebookShare to Pinterest
Labels: Lyr is slacking off

During the holidays, the BF and I enjoy creating new alts and playing them casually. This year, we picked a prot warrior and a resto shaman. Mad wanted to make an Orc warrior, like the one he used to play back in BC. So I decided to create an orc as well, something I've never done before. I must admit I'm starting to grow pretty fond of her. I already have two shamans, but I never get tired of leveling new ones. It's my favourite class to level, and I lost count of all the shamans I rolled throughout my WoW career. This is my first orc one, though.

Since I have no room left on our main server for new characters, I had to create her over on Rexxar, since all my heirlooms are there. (This might be the only useful thing about CRZ's, being able to quest with people from different servers.) Apparently though, when I shipped my heirlooms over, I didn't think I'd roll a resto shamy, because the mail caster items are the only ones I didn't send. Which is why my poor orc lady has to wear leather heirlooms. Oh, the shame.

After three days of playing on and off, our little duo is now level 43. Mad likes to tank by aggroing huge groups of mobs and keep running to get more like his life depended on it. Fortunately, I'm the one healing him, and most of the times, all I have to do is keep Earth Shield up on him and throw a couple Riptides from time to time. It makes for pretty smooth, quick dungeon runs, and lots of fast xp. It's been a lot of fun, but playing with my boyfriend always is!

Email ThisBlogThis!Share to TwitterShare to FacebookShare to Pinterest
Labels: Random thoughts, There really is no point to this post

Quick Post:The only time I play a male toon, this happens

99% of my characters are female. The only exception is my warrior, which is a male blood elf. Tonight, while trying to finally get him to 90, I was questing in the Dread Wastes. I had to kill a named mob and loot an item from it's corpse. I saw the mob in combat with a player, so I charged in to get credit as well, and then this happened :

5.1 only just went live and already, 5.2 is coming on the PTR in early january. Holy shit, are they on speed or something? Not that I'm complaining or anything. New content is always nice. Weirdly enough though, all I really care about is this:

I suspect it'll cost a shitload to buy the farm, but that's fine. What is gold good for if not to spend it on fun (and relatively useless) stuff like this? To me, it's totally worth it. I log on everyday to fix my five max level character's farms, and some days, that's the only thing I do in game. Enigma and Snakeroot seeds have become my primary source of herbs and ores, so the buff to the yield from special crops really is making me happy. Also, less Wild Crops? Thank you sweet baby Jesus.
Posted by Lyrestra at 21:58 No comments:

Email ThisBlogThis!Share to TwitterShare to FacebookShare to Pinterest
Labels: World of Farmcraft 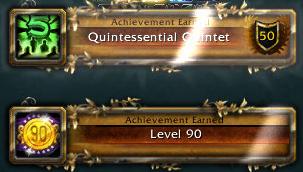 There, I did it! Last week, I finally finished leveling five of my characters to 90. I wanted to get as many toons to max level by the end of the third month into the expansion, which would be the 25th of december, so last week, I started getting busy. The shaman, hunter and mage were already max level, so I only needed two more for the achievement. The druid hit 90 Thursday night, and the Dk followed soon after, Friday night, scoring me the Quintessential Quintet.

The rest of my characters are not too far behind. The warrior is 88, while the paladin, priest and rogue are all at 87, gathering rested xp. The paladin should be a priority, considering I still need to get her to 89 so I can start working on Klaxxi reputation with her and buy the belt buckle recipe. But I suspect the warrior will be next, and then the rogue. The level 70 monk is still parked in Orgrimmar, along with the Bank Alt Warlock, which is still 85. I am in no worry to play the warlock though, as she's way too busy selling stuff on the AH and sorting through all the herbs and ores I've been farming and not using, trying to make it all fit in the guild bank.

I also want to get my alliance shaman to 90 for the Double Agent achievement, but I still have so many horde character to level, I don't know when I'll get to that. It's a good thing I'm not raiding, or I wouldn't have time for none of that.
Posted by Lyrestra at 22:31 2 comments:

Email ThisBlogThis!Share to TwitterShare to FacebookShare to Pinterest
Labels: Achievements, Lyr is an alt whore

Out of my eleven horde characters, eight are level 87 or higher, (the other three are 70, 85 and 86) and parked in the Shrine of Two Moons. This is good. I really want to get at least these eleven horde characters to 90, plus possibly two alliance ones, and I figure it will take me a couple months. Which is fine.

In the last week, my druid made it to level 89 just by healing random dungeons, and I must admit I had fun.  I still kinda suck at healing, but I did a fairly good job, and almost never let wipes happen. I did lose a couple dps here and there, and even the tank once, but hey, battle rez is there exactly for that. For a while now, my druid had been balance, but I decided to try resto again. It's a nice change of pace, and even though it's probably slower to just do dungeons, I really needed a break from all the questing.

On the alliance front, I faction-changed a lonely horde shaman I had on a server I never play on. She went from a goblin to a panda and it made me want to play her again. It's weird to see the alliance version of the Pandaria quests, but it's fun to be doing something different. This new panda lady joined Stands in Bad last night for their Old School Monday and we roflstomped through ICC. The only casualty: me. Because I was the only level 85. Heh. It was a lot of fun, and I scored two tier tokens and a killer axe. I think some people got their drakes, too, so it was pretty great. I was glad to be there with them!
Posted by Lyrestra at 11:24 No comments:

Email ThisBlogThis!Share to TwitterShare to FacebookShare to Pinterest
Labels: Lyr is an alt whore, Stands in Bad

I've been doing lots of dungeons lately while leveling my alts, and 90% of the time, something like this happens: There is a druid (or a monk) and a pally in the group. The pally gives kings. The druid/monk looks around, with a "what is this I don't even" look on his face.

Now, in all fairness, I know it doesn't really matter. It's not a raid. We don't need every possible buff. But every bit helps when you have a clueless bunch of noobs new players in the group. More buffs usually means the mobs die a little faster, the healer gets OOM a little slower, and we just might make it out of there all in one piece. Just maybe.

There's only two paladin buffs now for crying out loud. There used to be a lot more of those, and they didn't last half as long as they do now. And you had to buff every single player individually. You guys don't know how easy you have it nowadays.

So for the love of God, please, pallies. Learn to buff.
Posted by Lyrestra at 21:56 3 comments: